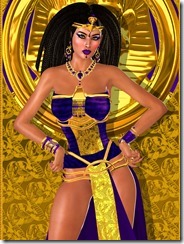 “Your majesty…I have traveled many leagues, across land and water, from a distant kingdom, to reach you this evening….” the tall and well dressed foreigner had said with a sweeping bow in her throne room, several weeks ago.

He was a strange man; his skin was much more pale than anyone from any land the Egyptians knew, and he insisted on only venturing outside when the sun was down, insisting this behavior to be royal custom in his native land.

Back then, Nefertiti never would have thought she’d be doing with him what she was right now. She moaned as his lips and tongue graced her nipple, circling and sucking gently and producing a great amount of pleasure. She lay naked on her luxurious bed, allowing the mysterious Prince Dracula to take her. His dark eyes beneath dark hair gleamed with devilish glee as he mounted her, and passionately kissed her neck. She wrapped her hands and arms around his back and the back of his head, and moaned again as he penetrated deep into her over and over again.

Nine months from that night, Nefertiti gave birth to her and Dracula’s son. Little did she know, that this was only 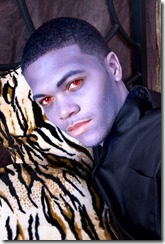 the second child for Dracula to father in these lands: the other was born to the Princess Giana, a jealous rival of Nefertiti…

Drake reached across Gia’s lap to grab the seat handle and lower the seat back flat in the front of his fancy black Cadillac. As the couple passionately made out, and Drake grasped Gia’s breast and began to lift up her shirt, Gia thought of how unusual it was for her to be with a man like this so soon after meeting him. They’d just both been partying at a club, and the way Drake spoke with that sexy Eastern European accent, and the way he confidently touched her just turned her on like mad. And his eyes; so dark, so mysterious yet so piercing. She opened her eyes to see his now, and enjoyed the loss of control as he gripped her thighs and got to work. Waves of pleasure rippled through her body and her soul as Drake took her. She felt herself sink into those beautiful dark eyes…

How did it end?  Order your copy of The Vampire Dancer Saga Part 3 to find out.

OTHER BOOKS BY SHALIMAR ALI: 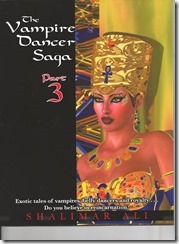